Last week I told you all about the disaster I had when making fudge, and the many valuable lessons I learned from the experience. This week I continue with my tale of woe with three more baking mishaps.

I was so looking forward to my steamed pudding with jam. I pulled out my tried and trusted Mary Berry cookbook, added all the ingredients and waited patiently while it merrily steamed away. 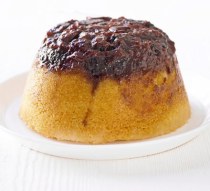 As an American my husband had never had a steamed pudding before and I was trying to get him excited by the prospect. I chatted incessantly for an hour about how wonderful this creation would be on a cold winters night, and everyone in England just loves a good steamed pudding.

After an hour the timer went off, I raced over to the cooker, took the pudding basin out, got a plate, turned the whole lot upside down and watched as the pudding slipped beautifully out of the bowl, onto the plate and looked just like it did in the cookery book.

Sadly though that was where the similarities ended, my husband took one mouthful and pulled a face. “So do you like it”? I asked enthusiastically. He pointed to the plate and asked if it always tasted like that? So I took a mouthful and that was enough for me. My beautiful jam steamed pudding was basically a salt bomb, so salty that my husband and I could barely eat a second bite.

Now, many English recipes call for self raising flour (aka self-rising flour in the US), and it turns out self rising flour in America contains salt…around 1/2 teaspoon per cup…and there was me thinking it was just the name that was different. Given I had added additional salt as per the recipe, it was a disaster.

Lesson learned, but I will make it again.

One of the easiest things to make. Flapjack basically consists of oats, butter, golden syrup and sugar, stirred together, spread evenly and firmly into a cake tin, and once cooked turns into a wonderful gooey snack bar. It is delicious and something I made all the time in England, so I couldn’t wait to make it here and start enjoying it once more.

To cut a long story short I must have attempted to make it at least 10 times and each time, it wouldn’t bind together and instead of a nice gooey bar I could enjoy with a cup of tea I ended up with buttery granola. No matter how hard I tried it would not bind together. For a long time I thought it was a difference between US and European butter (given that US butter has a higher water content) so I switched to European butter. But after another three botched attempts it was clear it wasn’t the butter. I had tried at least 5 different recipes and still could not understand the failure.

Then one day I stumbled across a random page on a blog that explained the difference between porridge oats (used in the majority of flapjack recipes in the UK) and rolled oats (sold in the US).

Turns out that size does matter and the larger rolled oats were never going to bind like their small European counterparts.

So another lesson learned.

Or in other words a dark chocolate brownie. So when a recipe calls for dark chocolate and cocoa powder it is best not to use dark chocolate cocoa powder. Why because the beautiful cake like thing you have just made becomes so dark it is completely inedible. And can you taste any ginger at all…err no, just dark, bitter chocolate cake that is almost black in appearance.

So the moral of the story it…it is okay to have baking disasters  If nothing else you learn a great deal along the way, it solves some of life’s little mysteries and it makes for a fun story.